The man I married at nineteen complained often that my biggest fault was that I was too damn independent. As a young bride I watched the Geritol commercial where the husband brags about his wife and proclaims, “I think I’ll keep her.” I lived each day for twenty-three years being kept, being owned. Every minute of my day was monitored. Clothes I wore needed to be approved. Any money spent was carefully reviewed.

We were the perfect family sitting in the Methodist church every Sunday. I was so good at playing the part of wife and mother I even became the church secretary. A fact that astounds my friends now! But underneath that flawless persona I became an excellent embezzler and a master secret keeper. Each time I bought groceries I wrote the check for more than the real amount. Never more than twenty dollars. I had the church pastor pay me in cash, so no one knew how much I earned.

Eight years later, I escaped. Driving away from the house that was my prison, I sang along with Mary Chapin Carpenter and her anthem of independence. “He Thinks He’ll Keep Her.” If you don’t know the song, the obedient wife walks away without looking back.

That kind of experience makes you a feminist. It makes you fiercely guard your independence. Then I met Dwayne. We had a different kind of marriage.

We were partners, and we shook hands on our agreement of equality. He didn’t tell me what to do. I didn’t tell him what to do. When I was out with friends, one of them would always say she had to call her husband to tell him what time she was getting home. I’d laugh smugly and say, “Dwayne knows if my shoes are in the closet then I’m coming home.” 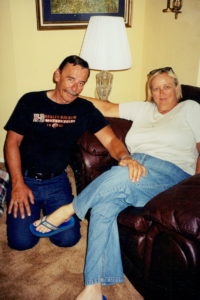 Riding a bagger Harley beside him only built my independent spirit. In this picture at his sister’s house in Texas, you can look closely at us and see the sunburned faces of bikers who rode side by side through the Mojave Desert. Partners. Best friends.

Then as suddenly as I found my true partner, he was gone. We lost our battle with pancreatic cancer.

During a dinner with friends from work, I listened to one of them talk about how she refused to put Mrs. in front of her name, and god forbid, she be called Mrs. Tom Smith. Another talked about making sure her kids had her maiden name in their names. I nodded and thought about how I would have joined their declaration of independence before Dwayne’s death

I may be a feminist, but I long to be Mrs. Dwayne Black again. To be introduced at biker rallies as Dwayne’s Mary or Dwayne’s old lady—that last one always earned a sarcastic comment from me. I want him here to say, “I think I’ll keep her.” I know I wanted to keep him with me.

When we think of a solo performance, we picture a singer or a musician, standing alone in the center of the stage. It is a triumphant moment. Loss has taught me a lesson about being alone. Solo has a different meaning now for me.

I long for the days of my partnership with my husband as Harley motorcycle riders. Like dance partners, we moved side by side in the wind. Swinging in a graceful arc to rest front tire by front tire, we parked at gas pumps and, at the end of a day of riding, in front of our motel rooms at night. Loss of my riding mate to pancreatic cancer made me a solo rider.

On sunny Sundays like today, I think about how much I miss being a woman motorcycle rider. Dwayne called days like this “T-shirt riding weather”. I would leave my leather jacket and chaps in the saddlebags and ride head-first into the wind, with the smell of the leafy trees and earthy crops in the fields flying by me. For just a minute, I imagine buying another Harley and setting off on a road adventure. I think of the motorcycle stories I could tell like the one Nikki Misurelli shares about her solo world tour on a motorcycle:

The dream usually ends when I remember the time I tried to get back on a Harley by going to a dealer and taking a test ride. The way the motorcycle felt so familiar beneath me. The easy way I moved through the mechanics of shifting and balancing. But then I remember how it felt to be racing down a highway on my own, solo, and then realizing there was no echo from a motor on my right. Dwayne no longer soars by my side. I’m truly on my own in the center of the stage. A solo performer. 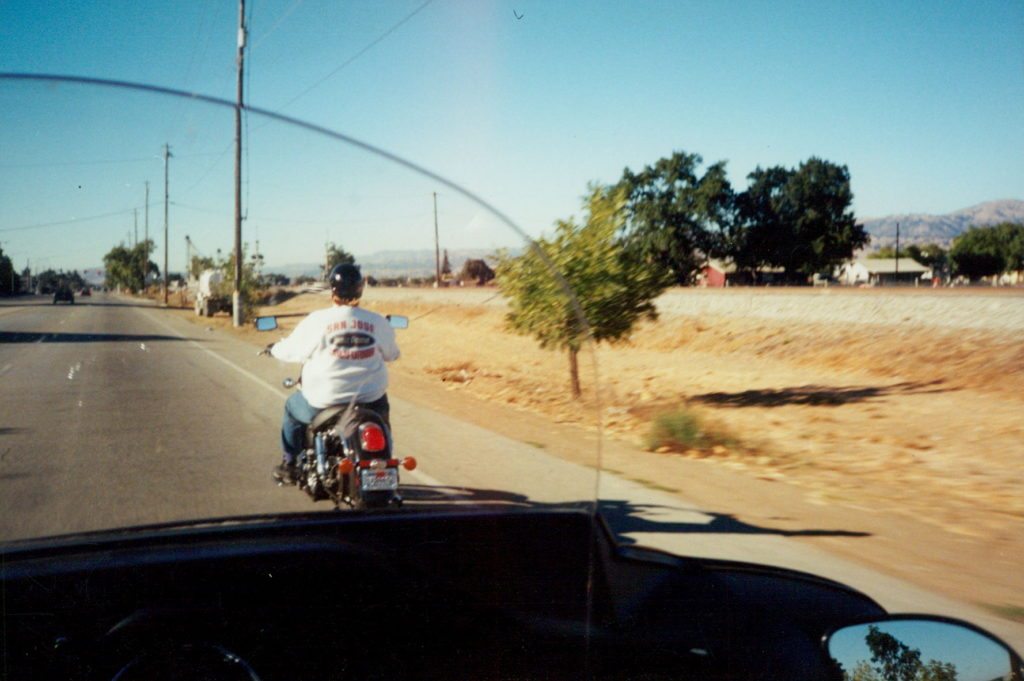